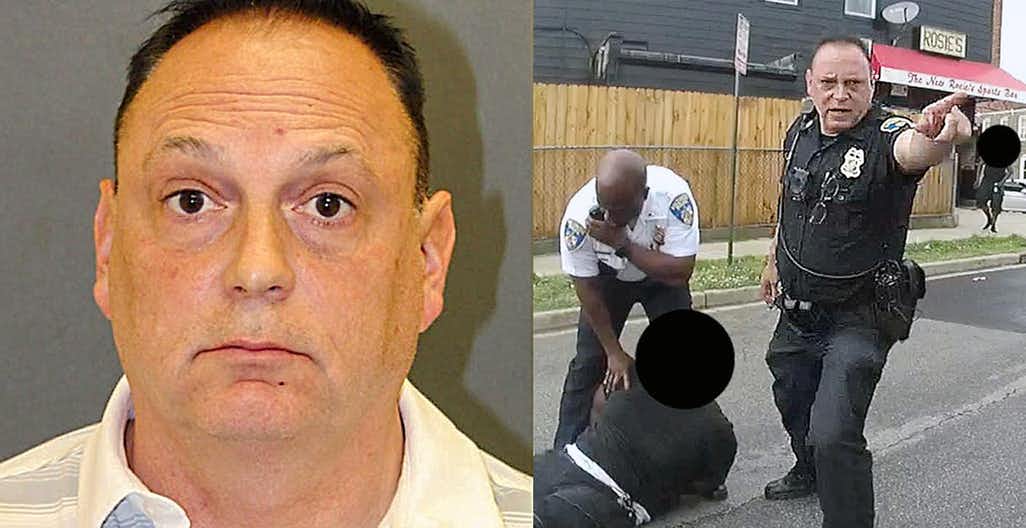 For years, Baltimore Police Sergeant Ethan Newberg racked up overtime hours by destroying innocent lives, a thug of a cop who made up the law as he went along, punishing citizens who dared question his tactics or record his arrests.

He was the highest-paid officer on the force when he ran after a man who had criticized him for making another man sit on the wet sidewalk last May. Lee Dotson was walking away when Newberg sprinted up to him and grabbed him, prompting Dotson to pull away from him.

Another cop tackled Dotson to make the unlawful arrest. Newberg then shoved the Dotson’s face into the street while the other cop drove his knee into his back.

“Take your charge like a man,” Newberg responded when Dotson demanded to know what crime he had committed.

Now it’s time for Newberg to take his charge like a man – 32 counts to be exact – charges ranging from assault, false arrest and official misconduct charges. Enough to send him to prison for more than 100 years where he would join about a dozen other Baltimore cops who have been sentenced to prison in recent years. A street gang evolving into a prison gang.

Newberg, 49, was indicted after investigators reviewed 12-months of footage from his own body camera and determined he had established a “pattern and practice of harassment and intimidation.” Many of those crimes were committed while milking the taxpayers on overtime, making $260,000 in the 2019 fiscal year, more than any other city employee including the police commissioner and mayor.

Now he is the 20th Baltimore police officer to have either been suspended, sentenced or arrested this year for crimes committed in the line of duty. Judging by his arrogance in the video, Newberg believed he was invincible. Untouchable. After 24 years on the force, nobody was going to tell him what to do.

Towards the end of the video, he accuses a fellow cop of interfering when the cop suggests Newberg “calm down” and “relax” in the moments following Dotson’s arrest.

“Don’t ever interfere …” Newberg began to say, his natural response to anybody who criticizes him. Except he quickly realizes he would not be able to arrest the cop for interfering as he did to Dotson.

“Just leave my scene. Go. Go. Don’t you ever tell me how to do my job,” Newberg tells the cop while shoving him away, oblivious to the fact his two-decade career was about to come to a crashing end.

Newberg was arrested and charged with assault, false arrest and official misconduct about a week later after Police Commissioner Michael Harrison got wind of the video. Harrison had been at the helm only three months, an outside hire from New Orleans.

Charges of interfering were also dismissed against Dotson as investigators began looking at all Newberg’s body cam footage for the 12 months preceding his arrest which was when they determined he had established a pattern of abuse although it was already well-established on the streets and among his peers that he was the bad cop, a role he played with pride.

“I’m the sergeant they talk about,” he would tell the people he harassed.

His behavior went unchecked until the arrival of the new police commissioner.

According to the Baltimore Sun:

Newberg had alleged that Dotson was “interfering” with his arrest of another man, but his body-camera footage, later released by the police department, showed a different story. In it, Newberg can be seen running at and grabbing Dotson as Dotson was calmly walking away from the scene while criticizing officers’ decision to place the other man being arrested on wet pavement.

“From what I saw, the man did nothing to provoke Sgt. Newberg, whose actions were not just wrong but deeply disturbing,” Police Commissioner Michael Harrison said in announcing that case against Newberg, alongside Mosby.

Harrison called the incident an example of the “horrible culture” within the police department, and said Newberg was “tarnishing the badge that we all wear.”

The police union denounced Harrison for what it called a rush to judgment in the June case. On Thursday, Sgt. Michael Mancuso, president of the local police union, could not be reached for comment.

The video prompted the State’s Attorney’s office to analyze other body worn camera footage. Marilyn Mosby said , “Following Sgt Newberg’s previous indictment my Public Trust and Police Integrity Unit along with the Evidence Review Unit began an investigation into Sgt Newberg’s conduct spanning the time between July 1, 2018 and May 30, 2019.”

On Thursday a Grand Jury indicted Newberg on 32 counts of assault including false imprisonment. The indictment says most of the incidents happened to citizens who were watching and posing no threat as the sergeant conducted other police business.

Mosby told reporters, “What might otherwise might appear to be isolated incidents….turned out to be numerous examples of a consistent pattern and practice of knowing, intentional and unlawful harassment, intimidation, detention, assault, domination and coercive and illegal tactics that were employed against law abiding citizens of Baltimore City with the intent to instill fear…as is alleged in the indictment.”

State’s Attorney Marilyn Mosby detailed nine incidents, including the detaining of a Fed Ex driver, a resident who inquired about what was happening outside of his home, an onlooker who witnessed a traffic stop from a stoop and woman who was taken into custody for “not minding her business”.

Earlier this month, Mosby announced she has a list containing the names of more than 300 cops from the Baltimore Police Department who has integrity or credibility issues.

Read Newberg’s charging documents here. Watch the video below that led to his downfall.

Tennessee Sheriff’s Deputy Arrested on 44 Charges, Including Rape and Stalking

Oct 31
Like
14
Web Master December 27, 2019 Uncategorized No Comments »
Sad Cop 1!
Biker Gang Protects Abused Children 7,478,295 views•Nov 25, 2013 22K 254 Share Save Carlos Whittaker 13.9K subscribers Subscribe This is amazing. This is what we should be focusing on. The good in the world… Show more 1,728 Comments Sort by Add a public comment… Sky H. 3 years ago Judge: Are you afraid? Little girl: No. Judge: Why? Little girl: Because my friends are scarier than him

Our goal is to preserve "Basic Constitutional Rights" through public awareness educational seminars,

Anyone that grew up with Brothers and Sisters already knows about the seemingly never-ending fights between siblings. It pretty much started at birth and magically ended when you grew up... But not always. So now you have your Biker Family, Your club Brothers (and Sisters) and Surprise Surprise Surprise Surprise, Here we go again except this time we ain't fighting about G.I. Joes, PS4's and Barbie Dolls. It can be some serious stuff with Big Consequences. Let's figure this out tonight on The Big BoneYard.#BigBone1Percenter #archbishop1percenter#TheBigBoneYard#BlackHarleyRider#mcprotocol#realbikershit#WFLCOC#bikertv#blackbikertv#LawFran ... See MoreSee Less

Cowboy vs Cops. Who do you think won? ... See MoreSee Less

Part 2 of:Human, Trafficking of Women, young girls and Boys is at epidemic proportions in the United States, Canada and other parts of the World. Bikers are everywhere so join us for tonight's episode. We are going to tell you what to look for and what to do so you can save a Woman or a child's life.#stophumantraffickin#BigBone1Percenter #archbishop1percenter#TheBigBoneYard#BlackHarleyRider#mcprotocol#realbikershit#WFLCOC#bikertv#blackbikertv#LawFran ... See MoreSee Less

JOIN US ON YOUTUBE SO WE CAN SEE YOUR COMMENTS.youtube.com/channel/UCSB9t7izM4lK90ufN5-WTgAHuman, Trafficking of Women, young girls and Boys is at epidemic proportions in the United States, Canada and other parts of the World. Bikers are everywhere so join us for tonight's episode. We are going to tell you what to look for and what to do so you can save a Woman or a child's life.#stophumantraffickin#BigBone1Percenter #archbishop1percenter#TheBigBoneYard#BlackHarleyRider#mcprotocol#realbikershit#WFLCOC#bikertv#blackbikertv#LawFran ... See MoreSee Less

HAPPY NEW YEAR BROTHERS!!We are back to our regular schedule for the WFLCOC! Our next regular meeting will be this weekend on Sunday, January 22nd at the Chester B McKay VFW #7987 7445 Chester McKay Dr, New Port Richey, FL 34655We are all pretty excited about getting the new year started off right so we can make this COC the best it has ever been! A big part of the success that we're going to see this year will be largely due to the Fantastic clubs that are COC members. We are going to get a lot of stuff done this year and have a lot of fun doing it!This month we plan to have Sharon Madison (Ms Brainz) as a guest speaker from Florida Rights Restoration Coalition. She will be conducting a workshop about Clemency for Restoration of your 2nd Amendment rights. The President of ABATE Florida will be in attendance to introduce us to the members of the newest ABATE chapter in Florida located in Pasco County. We are also expecting a certain Florida Congress member to attend this meeting (provided there are no schedule conflicts). We will be discussing our COC ShootOut, Anti Biker Profiling and more. Hope to see you there and if you are interested in becoming a part of the WFLCOC then make sure you reach out to our Chairman, Co-Chairman or any board member for consideration.Big Bone 1%er ... See MoreSee Less